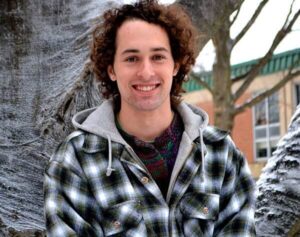 My favorite thing about Penn State is the breadth of opportunities that it has and the challenge it presents in leaving it up to you to pursue those opportunities and forge your own experiences.

Tim started out at Penn State as a nursing major, taking a few psychology courses out of interest.  One of his classes, Neurological Bases of Human Behavior, was of particular fascination to him, where he learned about sexual differentiation and hormonal influences on behavior.  Through this class he discovered Dr. Sheri Berenbaum’s research on this subject at Penn State, and Tim applied to work with Dr. Berenbaum in his sophomore year.   In the Sex Hormones, Brain, and Behavior Lab, Tim has explored the conceptual question of the hormonal influences on the brain, specifically regarding spatial ability.  Tim had been familiar with the behavioral data on hormonal influences on spatial ability, and his interest in neuroscience imaging inspired him to take this question to the MRI scanner to see how brain activation might influence these relations.  Tim presented a poster on this work at the Psi Chi Research Conference at Penn State.  More recently, after exploring the data available in Dr. Berenbaum’s lab, Tim has become interested in hormonal contributions to personality.  His senior honors thesis examines the effects of hormones in sex differences in personality, specifically the personality trait of sensation-seeking.

Tim attributes his accomplishments over the past few years to his experience in Dr. Berenbaum’s lab, which has taught him to think critically about the scientific method and psychological evidence, as well as how to formulate thoughtful research questions.  In addition to his development of skills in evaluating psychological research as a scientific process, Tim has learned effective strategies for working with peers and collaborators, giving and receiving constructive feedback, writing scientifically, and applying his critical thinking skills to broader contexts.   Working as a research assistant in Dr. Berenbaum’s lab has had a large influence on the types of avenues he might pursue for his career.  After graduation, Tim is interested in continuing work in a research lab setting to garner additional experience and to narrow down what he would like to do as a long-term profession.  In future work, he would like to engage in basic research in psychological disorders.

Tim is a psychology major who also enjoys spending time outdoors in activities such as hiking, rock climbing, and skiing.  He also has an interest in beekeeping.

We wish Timothy the best as he continues his academic pursuits!