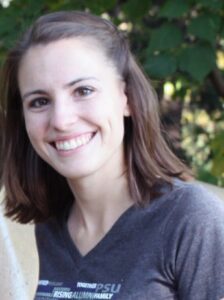 I have enjoyed being part of a longitudinal study because it allows me to stick with the same kids and see how they progress over time. My research experience at the Child Study Center not only helped me academically, but also shaped my research interests and future career plans.

Stephanie Tarle has been part of the Child Study Center since her freshman year, working with faculty members studying the development of emotion regulation in children.  A Schreyer College Honors student with a Psychology and Neuroscience major and minors in Disability Studies and Biology, Stephanie spent two years working with Dr. Cynthia Stifter in the Infant and Child Temperament Lab, and then began working with Dr. Kristin Buss in the Emotion Development Lab.  Stephanie began by coding videotapes of mother-infant interactions for affect and behavior and later became involved in data collection, conducting child and parent interviews and guiding children through behavioral tasks.  She has enjoyed being part of a longitudinal study because it allowed her to “stick with the same kids and see how they progress over time.” She feels that her research experience at the CSC not only helped her academically, but also shaped her research interests and future career plans.  Stephanie's honor’s thesis examined inhibitory and effortful control for self-regulation in preschoolers.  Stephanie graduated with honors in the spring of 2013 and will be starting a clinical PhD program (clinical neuropsychology) at Oklahoma State University in the fall of 2013.

We at the CSC wish Stephanie the best in her future academic pursuits!