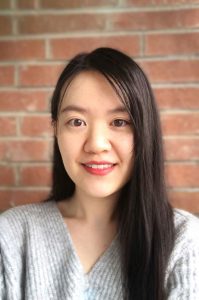 I am interested in parenting because it is a key predictor for child developmental outcomes.

Liu Bai, a fourth-year doctoral student in the Department of Human Development and Family Studies, received her bachelor’s degree in Psychology and her master’s degree in Developmental Psychology from Beijing Normal University in Beijing, China. During her training in China, she investigated how early experiences influence the ability to regulate emotions as a parent. She found that one parent’s history of emotional abuse predicted emotion dysregulation and parenting stress for both the parent and their partner. This work shaped her interest in the family environment, which is what piqued her interest in Dr. Douglas Teti’s research and brought her to Penn State.

In her present work, Liu is interested in how, during infancy and toddlerhood, parenting influences children’s social and emotional developmental outcomes, and how physiological regulation might affect the parent-child relationship. To capture physiological regulation, Liu measures stress and sleep regulation, a measure she has become increasingly interested in. She is also exploring how parents’ abilities to regulate their emotions subsequently affect their parenting stress and parenting quality. Liu found that infant’s mothers with irregular sleep patterns, especially those who tended to fall asleep later and were more inconsistent with their nighttime routine (i.e., different bedtimes and sleep duration), showed poorer parenting quality with infants at bedtime. In more recent work, she has found that this is predictive of lower levels of parent-child attachment security.

In Dr. Teti’s lab, one of Liu’s primary responsibilities has been the behavioral coding of parenting quality during bedtime by assessing parental sensitivity and responsiveness to their child’s cues. To broaden her knowledge and experience in children’s social and emotional development, Liu has also joined Dr. Kristin Buss’ Emotion Development Lab in the Psychology Department. Working under Dr. Buss’ mentorship, Liu examines different biological measures of stress and autonomic nervous system activity to predict child behavior problems in toddlerhood.

Liu plans to stay in academia and continue studying the interplay between parenting quality and individual child factors which shape child development. Her goal is to be able to translate her work to interventions that involve the whole family rather than individual family members.