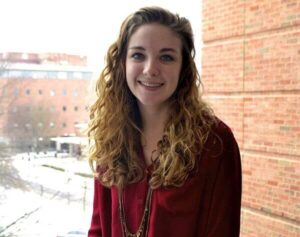 It has been extremely rewarding to work directly with children and see their progress over time. I feel like I’m making a difference with them.

Gretchen became interested in the opportunities at the Child Study Center (CSC) when taking Honors Introduction to Developmental Psychology in her sophomore year.  She thought that working with Dr. Ginger Moore would be a great way of gaining research experience while also pursuing projects that were of interest to her.  Gretchen developed her honors project and received funding to conduct the study through the Erickson Summery Discovery Grant, which includes an invitation to present her findings at the Undergraduate Research Exposition at Penn State.  Her honors thesis examines the contributions of self-efficacy, parenting stress, and breastfeeding to the development of postpartum depression and post-traumatic stress disorder in mothers whose infants were placed in neonatal intensive-care units.  Further, she is investigating these factors over multiple time points.  In her recruitment efforts, Gretchen has placed flyers in various hospital NICUs and reached out to mothers through social media.  Gretchen’s honors thesis is examining adults, but she found that she is motivated by the opportunity to investigate problems over time to look at when they first arise in an individual.

Through working as an undergraduate research assistant in the CSC, Gretchen has had a wealth of experience, such as coding behavior second-by-second in both parents and children in video-taped family tasks.  She also adapted a coding system of a teaching task with 27-month-old children.   The summer after her sophomore year at Penn State, she received a research scholar internship at the Lehigh Valley Health Network working to develop a postpartum model of care.  This experience was immensely gratifying for Gretchen because she worked directly in a hospital setting and spoke with a variety of different professionals, such as pediatricians, general practitioners, and social workers.  Gretchen is also friendship group coach in the CSC, helping children to build social skills for making friendships.  After graduation, she will work in Dr. Ellen Leibenluft's Bipolar Spectrum Disorders lab in the National Institute of Mental Health’s Emotion and Development Branch as an IRTA (Intramural Research Training Assistant).  In this two-year research position, Gretchen will be involved in research regarding psychological disorders and chronic irritability in children, with the goal of gaining more experience for her applications to Ph.D. programs in clinical psychology.

Gretchen is double-majoring in psychology and sociology, as well as double-minoring in music and French.  Additionally, she plays the viola in the Philharmonic Orchestra at Penn State and she studied abroad in Montpellier in France.

We wish Gretchen the best as she continues her academic pursuits!