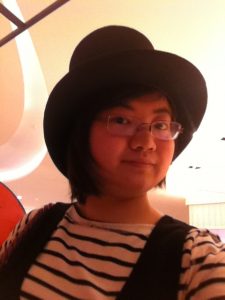 Yiming Qian is a third-year graduate student in Penn State’s Developmental Psychology doctoral program. Her research investigates the development of visual perception and its influence on cognition. Her primary mentor is Dr. Rick Gilmore.

Yiming’s interest in individual differences in perception and cognition and the relationship between behavior and brain structure and function has evolved into three different lines of research: 1) Visual motion perception from childhood to adulthood; 2) Sex differences in visual perception; and 3) Perception differences between typically and atypically developing populations. Yiming ambitiously collaborates on several projects. She works with Dr. Gilmore to study the development of basic visual processes, with Dr. Berenbaum to investigate causes of sex differences, with Dr. Scherf to examine whether the specificity to animal and human faces in adolescence extends to adulthood, and she works with Dr. Berenbaum and Dr. Beltz, a former Strumpf Scholar Award recipient currently at the University of Michigan, on a project examining correspondence between concurrent reports of pubertal status and retrospective reports of pubertal timing. Yiming has received two Graduate Scholar Awards and a Robert and Ruth Faris Child Psychology Enhancement Award. She has one first-authored publication, three first-authored book chapters, and has given five first-authored presentations. Yiming received her master’s degree in Learning and Developmental Science Education from Indiana University, Bloomington, Indiana, and her Bachelor of Science in Psychology from Fudan University, Shanghai, China. She also received a bachelor’s degree in Management, specifically Accounting, from Fudan University.

The Strumpf Scholar Award will provide Yiming with financial support to attend statistical and/or brain imaging training and will enable her to proceed with data collection to prepare for her dissertation. The award will also allow her the ability to present research findings and collaborate with researchers at professional conferences. All these benefits will help Yiming with her long-term research interest of understanding individual differences in visual perception and their neural underpinnings and how these influence developmental outcomes.